Change management is a difficult beast in any software environment, but in a multi-server Cognos BI environment it's especially hard. Partly because IBM Cognos doesn't seem to think anyone would have a multi server environment or do change management. But even a small team can quickly end up with many developers working with many different objects at different layers of the application stack (Database, ETL, Metadata modeling, OLAP objects, Reporting) and this can become a nightmare to wrangle. I'll discuss change management within a multi-developer project later, lets keep it at the package level for now. you have a multi server architecture, lets say it looks like this:

So how do you coordinate multiple developers working on multiple projects at different stages of release? One way we make this easier is with the concept of packages. Whatever you develop in development can't make it out of development until it is packaged into a release candidate. This packaging could be merely conceptual or you could actually move files around, but a package is generally defined as the set of data, metadata and bi objects for this application. (this includes all database changes, etls, OLAP objects, scripts, etc for that version of the application to function in production) This candidate can then move through the other environments and eventually into production, but only that package. Any failures in the testing stages, for example, would need to be addressed in Dev and promoted as a new package. This also lets me know what's in what environment as I can refer to them as packages (HR v1.2.1 is moving to test, Accounting v1.0 is moving to production, etc). We do some other neat tricks for version management with subversion tagging, documentation and a change control software for Cognos items called Motio, but this is the heart of my change management procedure. Only whole packages can move out of development or into the next stage! Here's what that workflow might look like. 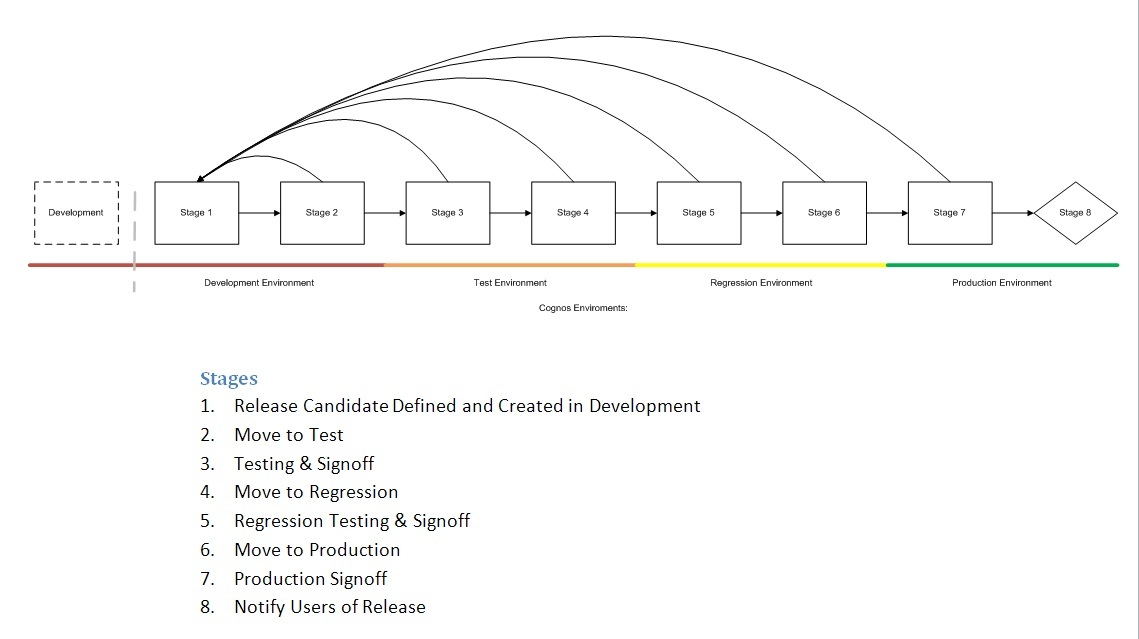 In my next post I'll talk about the numbering scheme I use for packaging. Hold on to your seats!
Posted by RecoveringBIAdmin at 10:15 AM 1 comment:

Sometimes Cognos fixes something and doesn't let me know about it. And sometimes those questions come around again and I google for them and the BI Bloggosphere helps me out. Today I had a user who wanted me to change the default analysis of a cube. Thanks guys.


My BI Experience: Analysis Studio Default Analysis report: "Recently had a requirement where a blank Analysis Studio report needs to open when you open an existing report and click on new report icon"

Posted by RecoveringBIAdmin at 12:55 PM No comments:

How do you usually debug your Cognos reports with embedded JavaScript? Mostly I develop in IE and then load whatever I'm working on up in Firefox and use the Firebug plugin to look for any errors. (mostly because Firefox 5 doesn't work for report studio (the menu buttons don't work?)). I think I'll put together a longer post on using firebug to debug Cognos issues, but does anyone use any other methods? 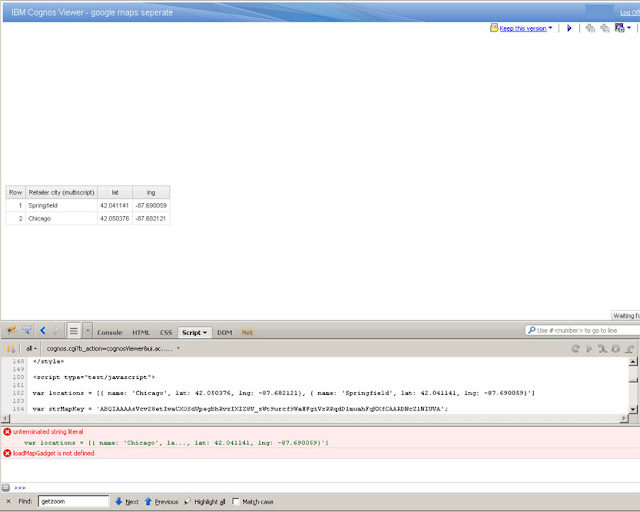 Visual Analyitics in the NYT!

Some Visual Arts students in Manhattan graphically represented some data about their lives in the NYT today. Pretty cool analytical design.

Read more »
Posted by RecoveringBIAdmin at 11:19 AM 3 comments:

In reading some background info on Cognos dynamic drill through I got a lot of current info from IBM's knowledge base. I have to say, since they were taken over by IBM the knowledge base area has gotten a lot better. For about a year it was a barren land full of out of date information and dead links, but here's a few good ones.

Specifically the Developer Works area is nice. They have a lot of case studies and examples for some esoteric tasks.


Posted by RecoveringBIAdmin at 9:12 PM No comments:

So one question I usually get asked by users when I build an analysis object is 'How do I drill through to the details?'. As much as we want to talk users out of looking at the details when we're building them aggregates, the reporting task of detail dumps invariably comes up. It's also a likely a sign of an immature business process, but that's a whole different post.

In relational scenarios this is straight forward, a drill target mapping can be used to jump from any context to any other, map the parameters and there you go, from a summary level, select the details.

In IBM Cognos 7 this was not too difficult, you could setup an IMR details report, link it as a drill target and the dynamic filtering would filter that result set based on the context of your selection at the time of drill through. (based on business key). In Cognos 8 this process has become a hectic jumble of xml, sql generation, report variables and other black magic. Don't be fooled by the numbering, Cognos 7 and 8 are totally different pieces of software and handle the drill through process completely differently. This contextual filtering in Cognos 8 and Cognos 10 is handled by a setting you may have seen in drill through definitions called 'dynamic filtering'.

Read more »
Posted by RecoveringBIAdmin at 3:51 PM No comments:

Attending the Tufte Course in Chicago.

I'm attending the Edward Tufte course coming up here pretty soon. I'm excited about this Tufte is an interesting figure in the world of data. His books deal with the presentation of data and visualization in a very smart and beautiful way. A nerd AND an artist. Hopefully I'll get some good ideas about data visualization and won't fall asleep like at most conferences.

Posted by RecoveringBIAdmin at 6:52 AM 11 comments:

Are you BI Curious? (Business Intelligence)


Hello, I’m a Business Intelligence developer and have been for several years. I’ll use this blog to post some best practices and interesting examples. There’s not a lot of good information out there on some techniques so hopefully this will be a good resource.

I’m currently doing a lot of projects in Cognos 8.4.1, Cognos 10 and Oracle so that will be the focus.

Posted by RecoveringBIAdmin at 11:51 AM No comments: